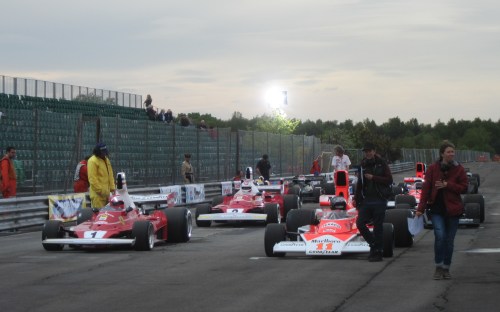 Ron Howard came through what he described as his ‘toughest test’ since he completed Rush when F1 insiders gave him an ovation after a screening of the film at the German GP.

Niki Lauda, who had already seen the film that tells his story, led the applause for a visibly relieved Howard – who admitted to the audience in his introduction that he was nervous.

While the film has been well received by members of the motor sporting media, Thursday night was the first time that it had been viewed a large group of leading lights from the F1 paddock, led by Bernie Ecclestone.

“I went home and immediately phoned my wife Cheryl,” Howard told this blog. “She understood when I compared it to the screening of Apollo 13 that we did at NASA for the astronauts and mission controllers. It was that kind of feeling last night, having everyone vouch for it, sanction it, and compliment us on it.

“It was, ‘Here’s the elite, they’re right in it, what are they going to think?’ I spoke to the drivers, and they were very complimentary, which made me feel great. Some of the engineering guys are so excited by what we’ve achieved. I don’t know where that comes from – perhaps they’ve been disappointed by other films, or perhaps they assumed it was too complicated for us to ever get it.”

Howard was particularly pleased to get an unconditional thumbs-up from Ecclestone.

“I said to Bernie, ‘Thanks for taking the time to see the movie,’ and he said, ‘Thanks for making it. It really took me back.’ He wasn’t joking, he was kind of emotional, and I think he was surprised.

“Surprised is the word that I have to use to define almost every screening. People are coming out of this having got somehow more than they expected, which is gratifying.”

Rush will be released in September.