The definitive layout for the Baku European Grand Prix was unveiled today by Bernie Ecclestone and Azad Rahimov, Azerbaijan’s Minister of Youth and Sport.

The street track has been designed by Hermann Tilke.

“Azerbaijan is the latest addition to the Formula One calendar,” said Ecclestone. “And I am pleased to see they have designed an innovative new street circuit that will definitely help to create a world class event when we race there in 2016.”

“We have created a challenging street circuit, in terms of engineering and design, and one that thrives on Baku’s very attractive urban atmosphere and its great combination of history and 21st century style,” said Tilke. “The historic city centre, the beautiful seaside promenade and the impressive government house all combine to provide the perfect backdrop for a spectacular new track.

“Obviously street circuits present a number of challenges, in terms of circuit design, but we have been able to incorporate some unique features that will provide the teams and fans with fascinating racing. For example, there will be an extremely narrow uphill section at the old town wall that will reward pinpoint accuracy and courage, and we have an acceleration section of almost 2.2kms along the promenade which will see the cars running flat out at very high top speeds – something that will create an incredible spectacle for the race fans on track and the viewers at home.”

Azad Rahimov said: “Our brief to Tilke Engineering was simple – create a circuit that is unique, one that will help the Grand Prix in Baku quickly establish itself as one of the most exciting, thrilling venues on the F1 calendar, and one that the fans and teams alike are excited about. Most importantly, we wanted a track that would showcase the best of Baku, our capital city, and I am delighted that the circuit the F1 teams will race on in 2016 has achieved exactly that aim.

“Now the next phase of hard work begins and we are all excited about seeing the circuit evolve over the coming months. We know there will be challenges, but with the support of Mr Ecclestone, Tilke Engineering and everyone involved in helping to create F1’s newest Grand Prix, we know we will deliver a spectacular event in 2016 that will add to Azerbaraijan’s well-earned reputation as a modern European country that is the perfect venue for the planet’s highest profile sports and entertainment events.” 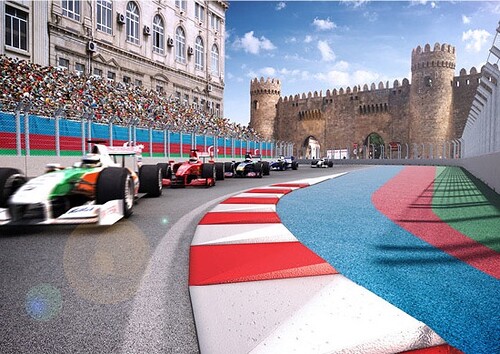