Button: Lewis is a fair guy on the track 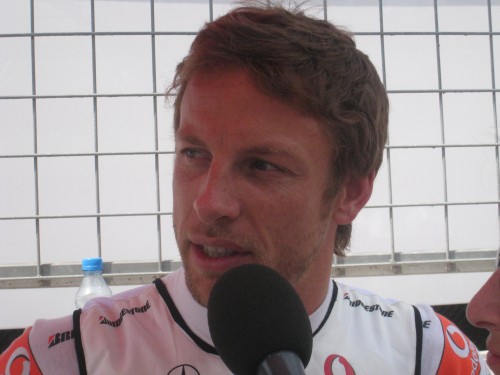 Button looks chilled before the start in Istanbul

Jenson Button says that he’s enjoying life at McLaren and especially the role he’s having in helping the team to progress.

Speaking in a Q&A on his website, he said how much he enjoyed last weekend’s Turkish GP, and the scrap with Lewis Hamilton that could so easily have ended the same way as the Red Bull battle. He also praised his team mate for being fair. The mood in the camp would seem to be very different from that at RBR.

“It was a great race, yeah,” said Button of Turkey. “It was very satisfying to have the performance to take the race to the Red Bulls, and to have been able to put pressure on them in the way we did. The last laps were fun too, proper racing, but fun, and fair. It was great to be able to race with Lewis, it’s actually the first time in our careers that we’ve actually been able to do that, and he’s a very fair guy on the track.

“It was tricky in those closing laps, because we knew we were pretty marginal on fuel, but the team lets us race and that’s exactly what we did. Lewis and I had a good scrap, and I want to congratulate him again for his win, it was a great drive.”

Button said he was pleased with the way the car performed in the race.

“I was, but we know that there’s still a way to go to beat the Red Bulls on sheer pace. But while that’s important, it’s not a target that we’re continually aiming at. We know they’re quick, but it’s more important for us right now to focus on what we’re doing, and make sure we’re absolutely performing at the limit.

“So that means we’re looking at improving every area; whether that’s reliability, performance, strategy, pitstops or operations, there’s a constant rate of improvement in every area of the team and that won’t stop.”

He says he”s impressed by the way that the team is building up some momentum.

“I’ve been in teams before where we’ve perhaps started the season strongly, or we’ve had a bit of a performance improvement towards the end of the season, but I’m really overwhelmed by how much this team can just keep developing.

“It’s incredibly exciting to be a part of, because it’s a different side to my role as a racing driver it’s not just about getting in and driving every two weeks, but it’s great to be part of the process that helps to test, refine and approve the new components we bring to the track each week. The feeling of contributing is incredible, and very rewarding.

“And you just can’t believe how hungry this team is: when I joined back in January, I was really struck by just how much we were pushing ahead of the launch, then during testing. But we’re now into an incredibly tough series of races, and we’re still bringing these huge new development parts to the track, and we’re bringing enough parts for both Lewis and myself it’s awesome.

“It makes you realise why Vodafone McLaren Mercedes is so strong  – there’s just no let-up. I’ve never known a team be so hungry to go racing. And, like I say, it’s just great to be part of.

“Qualifying pace is still something that we’re not entirely satisfied with, but we’re pleased that we do appear to have closed the gap to Red Bull. Certainly, if you look at our relative pace in Barcelona, and compare it with Istanbul, then we do seem to be closer. We’re not there yet, but we think we’ve got a good package for Canada, and we’re working hard to bring a series of larger improvements to the car later on in the summer.”

One response to “Button: Lewis is a fair guy on the track”