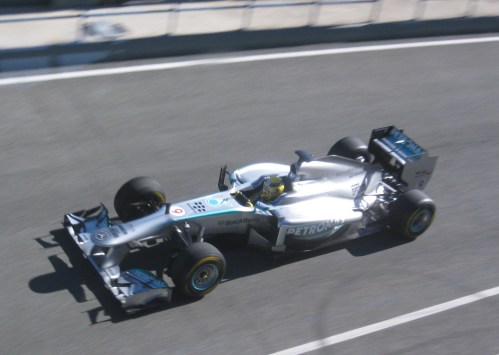 Nico Rosberg gave the new Mercedes W04 its first laps this morning at Jerez, ahead of this afternoon’s formal launch.

Rosberg was being filmed as Mercedes has the Spanish venue to itself, prior to the official start of testing tomorrow.

The team has taken advantage of the new ‘modesty panel’ rules to incorporate a smoother nose than last year’s, giving the car a much neater overall appearance.

The car also carries the logos of the team’s new partner, BlackBerry, which was announced this morning.

3 responses to “Mercedes W04 takes to track in Jerez”