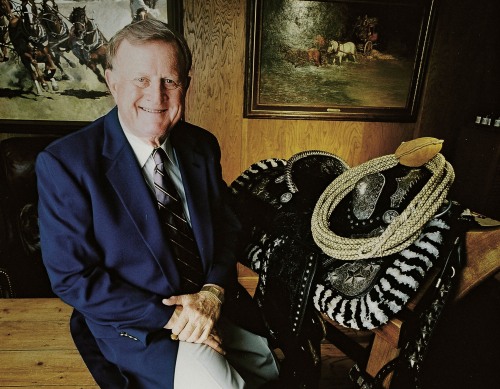 Wealthy Texan Red McCombs is the main investor behind the Austin F1 project.

Born in 1927, Billy Joe ‘Red’ McCombs made his fortune in car dealerships and was a founder of Clear Channel Communications. He is ranked by Forbes Magazine as one of the 400 richest Americans. He is heavily involved in sports and especially basketball, and used to own the San Antonio Spurs, Denver Nuggets and Minnesota Vikings teams. The business school at the University of Texas in Austin is named after him thanks to a $50m donation.

He also owns real estate company Koontz-McCombs and McCoombs Energy. As already reported here, there is a push to use the new track to help develop alternative fuels, which partly explains his interest.

McCombs admitted he knew nothing about F1 before the project started. He says Bernie Ecclestone asked him this morning if the track will be ready by 2012, and he replied, “Remember, we are talking about Texas, we are not talking about anywhere else…”

McCombs said: “Competition is what drives me, whatever the sport is, even if it’s a spelling bee. I’m for man against man.” He also made it clear that “we do intend for it to be a profitable venture.” He added that henceforth he wants to call Austin “Speed City”…

“Bringing Formula 1 back to the United States represents the opportunity of a lifetime and one that any city in the world would want,” said McCombs in a statement. “The size and scope of an F1 event is comparable to hosting a Super Bowl and will bring substantial economic benefit to Austin, San Antonio and the entire State of Texas.

“We know Tavo has a clear vision for developing Formula 1 into a major event with year-round opportunities. Over the past few years, he has built a solid business foundation and has assembled a great team – one we are proud to be part of. We are ready to roll-up our sleeves and work alongside Tavo to make this project a huge success.”

Hellmund added: “This project has been a tremendous undertaking. But for at least the next decade, Texas will host a global sporting event on an annual basis in a new world-class multipurpose facility. Knowing that our hard work is being rewarded and that my dream is becoming a reality is extremely gratifying. It is a great honor to have Red McCombs and McCombs Partners as our primary investor and partner. Red’s success in business and the professional sports arena is legendary. Working together as a team and under Red’s direction, we will ensure that this project will make all Texans very proud and will benefit our great State.”