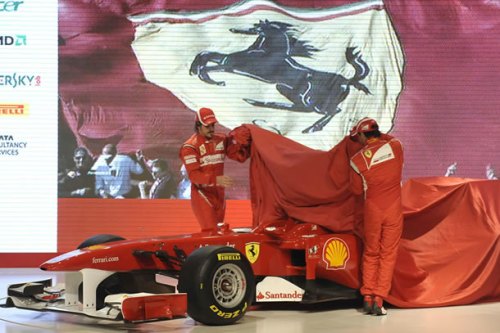 Ferrari hasn't shown all of the F150's secrets yet

The Ferrari F150 is the first car to give us a clue as to how this year’s breed will look. Inevitably the Italian team hasn’t shown all its cards, and front and rear wings and other aero elements will change during the build up to the first race.

Aero wise, the team has had to deal with the rule changes that ban double diffusers and f-ducts, while this is also the first car we’ve seen with a proper adjustable rear wing, although Mercedes experimented with one at the Abu Dhabi test.

“The car’s evolution has been planned with two big stages,” says technical director Aldo Costa. “One during the winter tests, where we will mainly develop the area of the mechanics, which means that the car’s structure, the chassis, the gearbox and the suspension will remain the same for the first couple of races. The aerodynamics is simplified and temporary for the first tests, waiting for the real aerodynamic development for the first race.

“The major aspects with the most impact on the project were connected to the aerodynamic development. The car will change a lot. The double diffuser, the F-duct, is gone. The driver can’t change the car’s aerodynamic set up anymore. The underbody won’t have any ‘holes’ in the central part anymore. This is a fundamental change. The rear wing will be movable, so that the driver can overtake the car in front of him and use it in the qualifying according to his needs.”

The team’s biggest challenge will perhaps be the switch to Pirelli. While everyone else has had to do it too, Ferrari had a 13-year ‘special relationship’ with Bridgestone, and all of that accumulated data and knowledge means very little now. Those who were on Michelin at recently as 2006 arguably have less to lose, and also have more recent experience of how to deal with a change of supplier.

Like everyone else Ferrari has reintroduced a KERS system. Along with McLaren it had the most effective system in 2009, but it has been developed since then. Its location and packaging in the car has also changed, not least because cars have much bigger fuel tanks than they did two years ago.

Also for this year there’s a restriction on weight distribution, so all the teams have had to build their cars within the set limit.

The KERS packaging has also impacted on the engine – the architecture of the front of the V8 has changed, and updates to the KERS system have also had an impact on cooling and lubrication. All of this has been done on the basis that Ferrari is able to provide the whole package to both Toro Rosso and Sauber. The team says it has also addressed engine reliability, with particular regard to pneumatics.

The front of the chassis has been affected by the more stringent crash tests, and it is higher, so that the driver sits higher. The side intakes are smaller than previously. Rear suspension is new, while the front has been altered to adapt to the changes to the monocoque. There’s also a revised brake system.

“We started when the previous car touched the ground,” says chief designer Nikolas Tombazis. “That was in late January last year. We put some basic ideas together, started talking about the new regulations and how they would influence the main parts and we set up a programme in the wind tunnel to examine the new regulations.

“This project had several important challenges, because the regulations are quite different from last year’s. We had to reintroduce the KERS in the car. We’ve learned a lot about the KERS two years ago. But now we’ve got a new package, so the installation wasn’t the same. We had to think about that a lot.

“Another challenge was the mobile rear wing. This is one of the novelties in Formula 1 this year. So we had to plan a wing, which doesn’t influence the performance when it’s shut in its normal configuration, but which gives us the highest possible reduction regarding CD, which means highest possible speed on the straights during the qualifying or while overtaking. This was a very important project. A third challenge was the introduction of new tyres. When you change tyres you also have to change several aspects of the car, regarding weight distribution, suspension between front and rear, but also some aerodynamic aspects.

“Because the Pirelli tyres are new, we’ve got lots of work. This is almost less important thinking about the aerodynamic aspect – this year we can’t use a double diffuser. So we had to set a very ambitious goal, gaining the performance we lost without the double diffuser.”

Tombazis says that there’s more to come, and intriguing he mentions exhausts, an area that many expect to be key this year in terms of aero: ”We’ve been working on different innovations for the car: some of ours and some new for Formula 1 in general. The rear suspension is really innovative, so is the rear wing system. But there are more novelties coming up regarding the configuration for the first race, which aren’t in the car yet, for example something for the rear wing and the exhausts.”

He believes that the team has achieved its performance targets.

“We think we did. We set targets we think are very ambitious regarding the development in the wind tunnel, the car’s weight and the performance of some sub-systems. We think, based on our analysis, that we’ve reached these targets. Especially for the car for the first race.

“Having said that, the regulations are new and it’s impossible to know exactly where our competitors stand. I’m convinced that also they set themselves some ambitious targets. I’m confident in what we’ve done, but as long as we don’t see the cars on the grid for the first race, it’s a little bit difficult to answer this question.”