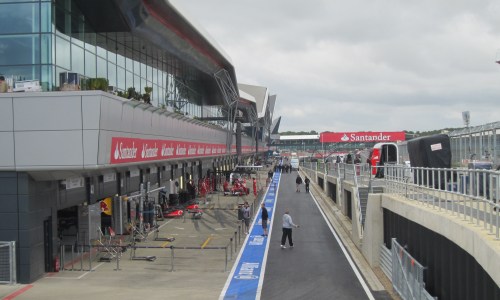 The garages of the top F1 teams have been moved to the middle of the pit lane for the British GP, so that fans will be able to see them.

At the first race with the new Silverstone pit complex last season the garages of Red Bull, McLaren, Ferrari and to some extent Mercedes disappeared into the unusual ‘railway cutting’ at the far end of the pitlane, and could not be seen from the spectator area opposite.

An additional concern for RBR was that the last garage was so close to the white line marking the pit exit that its drivers were not able to accelerate up to the speed limit before crossing it, which created a small disadvantage at each stop.

The allocation, which is decided by FOM rather than the FIA, has been changed for this year. However on a one-off basis instead of the World Champions being at one end and the remaining teams laid out in 2011 championship order, the top teams have been put in the middle, and the rest spread out on either side.

“The pit lane is a little bit unusual,” McLaren’s Martin Whitmarsh told this blog. “Last year some of us enjoyed no view of the stands, and consequently presumably they enjoyed no view of us. It’s easy after the event to be critical of that. But this year we will have a different garage allocation, and we’ll see a bit of sun in our garage.

“We’re more or less in the middle. No one’s explained exactly why! I imagine the desire is to put us in front of the grandstand, which is a good thing. If I was a grandstand ticket buyer and I got there and I couldn’t see my favourite teams, I’d be a bit non-plussed by it.”