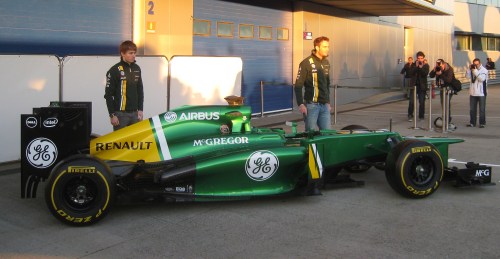 Pic and Van der garde with their new toy in Jerez this morning. Photo: AC

Caterham left it to the last minute by launching its new CT03 just before the start of testing at Jerez today.

The car features a dramatic new livery and retains the step on its nose. Significantly it’s the first car produced in the team’s new facility rather than at its original home in Hingham. The car is called CT03 because CT02 was allocated to a road car.

“CT03 is the first car we have produced in the Leafield Technical Centre so it marks an important milestone in the development of our team,” said technical director Mark Smith. “The season ahead presented us with an interesting challenge early in the design process as it is the last year of the current regulations before the introduction of the new engine rules in 2014.

“With that in mind we decided that CT03 would be an evolution of CT01 rather than a complete re-design, allowing us to focus our resources on developing areas of last year’s package where opportunities would give us the greatest return, whilst also beginning work on the 2014 package.”

Smith insists that the car has changed a lot since last year.

“We have made a number of significant changes to the car that takes it from the package that gained us tenth place in the 2012 Championship in Brazil into CT03. Among the most obvious are around the lower chassis where the sidepods have been significantly undercut to improve airflow to the rear of the car.

“The diffuser, engine cover and cooling exits have also seen major changes and there are more subtle improvements to other areas of the car, such as the sidepod turning vanes and the lower tea-tray area. This is the package we will take to race one in Australia, and as part of the 2013 upgrade programme we will then bring new front and rear wings and a new diffuser soon after the start of the season.

“However, the CT03 car that starts testing in Spain on day one in Jerez is not the only visible change amongst a number of other important developments at Caterham this winter.

“Personally I am excited about the season ahead, and the challenges that face us. Regardless of the resources and budget available, all the teams will be racing in 2013 with one eye on next year when the new rules may present opportunities to make significant gains, much greater than those available under static rules. Our whole team is ready for its fourth season in F1 and I am sure it is going to be another thrilling championship.”

One response to “Mark Smith on the new Caterham CT03”