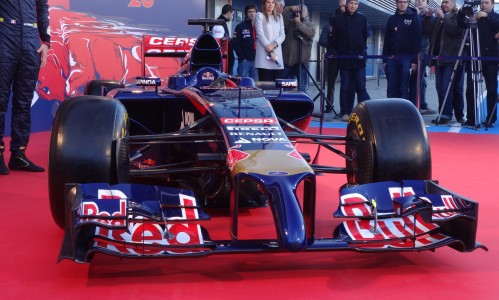 The new Toro Rosso with another ‘interesting’ nose. Photo: AC

Scuderia Toro Rosso became the first team to properly unveil a 2014 car to the media when it showed its new SRT9 in the Jerez pit lane.

The car is the first from the team to uilise a Renault power unit, which has allowed a greater crossover of technology with sister team Red Bull.

“The whole point of going to Renault was to get those synergies,” said Key when asked by this writer. “Where we can, we co-operate. If there’s a certain concern about an aspect of the design and we need to to discuss with Red Bull and Renault on the power unit side, then we have, and that’s been fine.

“But the majority of that has come on the gearbox, where we use the same internals as red Bull. We’ve got a common reliability intensive area there, where we’ve got two teams running the same thing, and obviously it makes a lot of sense to do that.”

Although the two teams share internals, the casing is STR’s own: “We wanted to maintain maximum flexibility on rear suspension geometry, so you had to do your own gearbox casing. We came to a sensible conclusion that we’d do our own casing and take the internals from Red Bull.”

The front of the STR9… Photo: AC