Roland Ratzenberger: Memories of a friend 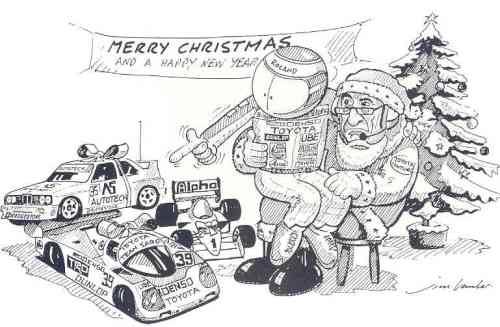 Roland commissioned this Xmas card from the great Jim Bamber

Today is the day the motor sporting world remembers Roland Ratzenberger, and I’m happy that his name still means something even to those who never had a chance to meet him.

I was fortunate enough to call him a friend. Indeed he was one of the best friends I ever had in motor racing, and someone who played a game changing role in my life. I think about him often, and not just on April 30.

I was pleased when the makers of the Senna documentary went out of their way to find a clip of him talking to Simtek engineer Humphrey Corbett at Imola – footage of Roland is hard to come by, and it was the first time in years that I’d heard his voice, or seen him talking.

Recently I’ve been digging through boxes of ancient microcassettes, and many feature Roland. Mostly he’s talking about understeer or oversteer at whatever race we happened to be at, and I regret that we never sat down and properly talked through his career. The closest I got was when we did the 1986 Formula Ford Festival as a Race of my Life for Autosport. The struggles he faced to even get onto the grid that weekend were a reminder of just how hard he had to work to make it.

I had first met Roland that season, when he was starting to make a name for himself in Formula Ford in the UK. He was basically running his own show, working on his own car, having got his start by preparing machines for drivers of lesser talent and teaching in racing schools. He didn’t have a manager, and everything he did was as a result of his own hard work.

I got to know him more as he worked his way through F3, British F3000, touring cars and into sportscars. He was always keen to forge relationships with journalists, as he was well aware of the value of the media. But it was his charm and sense of humour that caught your eye, rather than any boasting about his achievements.

When I was on the staff of Autosport and he was racing in Japan I’d often ring him for the latest gossip and for the inside story on what had happened that weekend. In the summer of 1991 I decided to go and see the Japanese scene for myself, and my two-week trip started with a local Group C race at Fuji.

I’d been to Fuji and Suzuka several times for World Sportscar Championship races, but I was always passing through on the way to a race, and had never had a chance to spend any time in Tokyo. On Sunday night after the Fuji race some of the drivers took me on my first ever tour of the city’s Roppongi nightspots, which proved to be a real eye opener. We started in Charleston, an Italian restaurant that is still there today and is virtually unchanged, and then went on something of a bar crawl.

Gradually Johnny Herbert, Thomas Danielsson, Volker Weidler and the rest faded away, until just Roland and myself remained in a grotty dive called Deja Vu. We had a few more beers, and I can remember Roland teasing a lady of the night who seemed convinced that she had bagged him as a customer. She finally got the message and left us.

Roland and I were the last customers, and as we departed, they were putting the chairs on the tables. It was daylight as we stumbled back to the President Hotel, and somewhere along the way we came to the conclusion that it would be a fine idea if I came to live in Japan to cover the local racing scene, and give the overseas drivers some extra publicity back in Europe. It seemed like a good idea at the time, and sure enough, that’s exactly what happened.

The following March I duly turned up in Japan with a couple of suitcases at the start of what turned out to be a two-year stint in the Far East. It was to be perhaps the defining experience of my life, and I formed bonds with drivers that are still in place today, all these years later. I also met the future Mrs C in Tokyo. And without that drink-fuelled conversation with Roland, it would never have happened.

My first race weekend in 1992 was a Suzuka F3000 event. A team had booked me a hotel room at the Circuit Hotel, and when I discovered that it cost £120 a night – about £120 more than my budget – I was stuck. Roland took pity on me, as he had a spare bed in his twin room, and he was happy to have some company.

That weekend he happened to be driving a knackered old Lola chassis, and when he failed to make the grid he was as depressed as I’d ever seen him. Fortunately the team would eventually give him a new car, and he was soon at the front.

He was well aware that living and working in Japan as a freelance didn’t make much financial sense for me, and he did me a huge favour by asking me to write his press releases, which I then faxed to personal sponsors and his pals in the Austrian media. The inside cover my old address book still contains the list of numbers I used.

He paid me equivalent of around £70 a race. It wasn’t much, but it helped towards my expenses as I travelled around Japan by train and plane. Roland also persuaded other drivers to use me, and soon my client list included Jacques Villeneuve, Mika Salo and Heinz-Harald Frentzen. They all made it to F1 so my PR service must have done something!

Roland had another reason to be a little melancholy on that first Suzuka weekend. In the winter in Monaco he had married the former partner of another driver after a whirlwind courtship. Suddenly he was not only a husband, but also a stepfather, as the lady in question had a son. However, it was all over within months, and by the start of that 1992 season, he was single again.

Around that time I remember we chatted in a restaurant with a British driver who enjoyed a brief spell in Japanese F3. In stark contrast to Roland he was lacking, shall we say, in both the looks and charm departments. When the conversation turned to women he said, ‘I haven’t been laid since Macau.’ ‘I’ve been married and divorced since then!,’ was Roland’s deadpan reply…

His biggest mistake was the commitment he made to the lady in question by throwing away the little black book of phone numbers that he’d spent years collecting. Starting from scratch was not a problem, since Roland always had an eye for the ladies, and he had an amazing success rate. He wasn’t averse to chasing the girlfriends of other drivers, as his brief marriage attested, and that occasionally made life difficult!

One of his unusual goals was to try to enjoy female company in the team motorhome between stints in 24 hour races. I think the last time we discussed it he’d managed the feat twice at Le Mans, and once at the Nurburgring.

At Le Mans in 1990 I was waiting in the pitlane with Roland and a bunch of other drivers before the start of the parade laps. A girl emerged from the crowd. The daughter of a marshal, she turned out to be his conquest of the previous year. ‘Why didn’t you write?,’ she said somewhat sadly. All Roland could do was smile…

At the start of the Simtek era he hooked up with a young lady who, years later, would become a major UK TV personality. He sent the team a handwritten fax detailing, in perfect motor racing engineering language, what happened on their first night together – including problems with bottoming out! A debrief of a very different kind.

There are so many stories, such as the time he used his deep Austrian accent to record a Terminator-style ‘I’ll be back’ answer machine message for F3000 rival Jeff Krosnoff, whose own life would be tragically cut short in a Champcar crash.

There was his disappointment when he found out that Jacques Villeneuve knew so little about father Gilles, and his sadness when I told him that Denny Hulme had died at Bathurst. Motor sport history meant a lot to him.

Then there was the time Anthony Reid had a huge accident in front of him during an F3000 test at Fuji. Reid came to a halt without his helmet and with blood streaming down his face. It was actually a superficial injury, but Roland had to take charge of the scene as the marshals had freaked out. Later he made sure I wrote about the shortcomings of safety in a Japanese magazine. He wanted to make a point.

Once we even discussed Austria’s appalling run of racing tragedies – Jochen Rindt, Helmuth Koinigg, Jo Gartner and the sadly forgotten F2 driver, Markus Hottinger. He was not impressed when I mispronounced the latter as ‘Hot,’ instead of something like ‘Hurt,’ with an umlaut. We didn’t know that a couple of years later he would join that sad list.

All these memories have been bouncing around my head for the past 20 years, and he’s never far away. But what I remember most of all is that huge, beaming smile that was his trademark. I consider myself lucky to have known him.

19 responses to “Roland Ratzenberger: Memories of a friend”