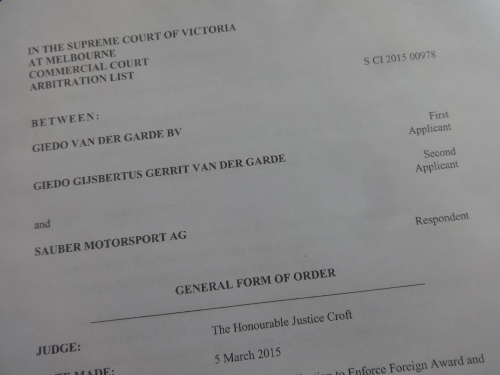 Giedo van der Garde has launched a dramatic last minute legal effort to recover the Sauber race seat that he believes is rightfully his.

The Dutchman has commenced an arbitration action in the Supreme Court of Victoria and is hoping that a positive result could force Sauber to put him back in the car. In essence he wants the Australian court to support a legal decision made in Switzerland in his favour earlier this week.

The joint applicants are the Dutch management company that bears his name, and Van der Garde personally. The case will be heard by Justice Croft in Melbourne on Monday, despite it being a public holiday in Australia.

Van der Garde’s backers paid a substantial sum for him to be third driver last year on the basis that he would graduate to a race seat this season – in theory alongside Adrian Sutil, who had an ongoing two-year contract.

However, late in the season both Marcus Ericsson and Felipe Nasr came on the scene with bigger sponsorship deals, and Sauber opted to take them instead.

Team principal Monisha Kaltenborn, a lawyer by profession, has always insisted that the team is on solid legal ground. Nevertheless van der Garde has continued to prepare for this season as if he was going to race.

Court papers submitted on his behalf indicate that Van der Garde signed a ‘driving, testing and promotional services agreement’ on January 20th 2014, and that on June 28th Sauber exercised a contractual option which meant that he would be a race driver in 2015.

After the team had announced Ericsson and Nasr, on November 24 van der Garde commenced an arbitration proceeding in the Swiss Chambers’ Arbitration Institution. In it he “sought permanent injunctive relief that would have the effect of assuring the Second Applicant a place as a race driver on the Sauber team for 2015.”

A decision, or ‘Award’, was made by the SCAI in favour of the driver on March 2.

The Australian documents note that as a result: “The Respondent [Sauber] was ordered to refrain from taking any action the effect of which would be to deprive Mr van der Garde of his entitlement to participate in the 2015 Formula One Season as one of Sauber’s two nominated race drivers.”

Officially the Australian case is an ‘Application to Enforce Foreign Award,’ ie the judgement made in Switzerland.

The documents add that failing to officially nominate van der Garde as a race driver represents “an intention to breach, if not an actual breach, of the Award by the Respondent.”

Although the language is convoluted the documents hint that there has at least been a discussion between the parties about what happens next: “… since the Award was handed down on 2 March 2015, the Applicants have made several attempts to engage with the Respondent in relation to the Second Respondent’s participation as a driver in the 2015 Grand Prix season (including at the Australian Grand Prix) and the Respondent’s representatives have indicated that the Respondent is considering its position in the light of the Award.”

The bottom line is that the case represents a matter of survival for Sauber, in that the team took the two drivers with the biggest budgets in order to ensure that it made it into the 2015 season. If the Australian court does force it to take van der Garde at the expense of one of the other drivers, the situation could become very messy.

Van der Garde was previously involved in a legal action with Force India, relating to his time as a test driver for the former Spyker team.