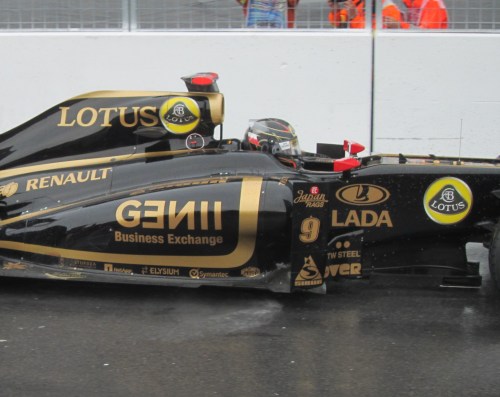 The ban will put an end to this unusual sight...

There’s no doubt that Renault – currently a solid fourth in the World Championship – will suffer more than most when the FIA bans its innovative side exhaust for 2012.

On Saturday the FIA’s Charlie Whiting wrote to the teams about blown diffusers, and while a clampdown on hot and cold blowing from Silverstone onwards caught most of the attention, the letter included a huge change to the exhaust rules for next year.

The plan is to have basic designs that exit behind the diffuser, and thus can have no impact on it. That will mean an end to the system run by Renault this year, although of course everyone else will have to start afresh too.

The details will be discussed at Thursday’s meeting of the Technical Working Group in London, but the FIA is believed to be intent on pushing through the main points. Technical rule changes for 2012 have to be fixed by June 30.

“I can feel what McLaren felt when they decided to ban the F-Duct!,” team boss Eric Boullier told this blog in Canada. “To be honest we’re not thinking too much about it. But when you want to go one route, if the FIA is changing the rules, we have to stick to the rules. We need to understand the exact reason, but if at the end the decision is to ban these systems, we’ll work on something else.”

The shorter term clampdown for the British GP affects engine mapping rather than hardware, and teams will still be able to get some benefit.

“It’s definitely a change, and if we can make it work differently on our car, we’ll do everything we can. We need to understand exactly what Charlie wants to ban.”