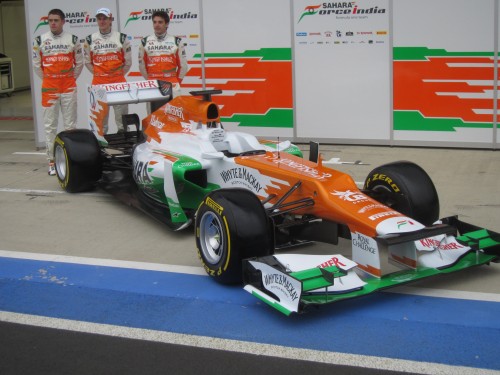 Here's the new Sahara Force India - with another interesting nose

Sahara Force India has revealed its new VJM05 at Silverstone today, and the car has another distinctive nose.

It’s the second car produced under technical director Andy Green. The team operates an alternating system of Project Leaders, and the VJM05 is thus the responsibility of Akio Haga, Ian Hall having overseen last year’s car.

For a fourth year the team is using a Mercedes engine and a gearbox supplied by McLaren Applied Technologies.

“I would say that the car looks a lot more refined than previous cars produced here,” said Green. “It does a look a lot racier and a lot more purposeful. You can start to see the aerodynamic concepts coming through now. It looks quite a bit different to the previous years, which is good.

“And so far the performance in the tunnel has been extremely encouraging, so we’re reasonably happy with where it sits. It’s just that unknown of where everyone else is – and we won’t know that until Melbourne.

“The nose height regulation has led to the biggest visual change in the car, and then there’s the exhaust regulation. The rest of it is very subtle.”