Whitmarsh praises Todt for not using F1 ‘for his own promotion’ 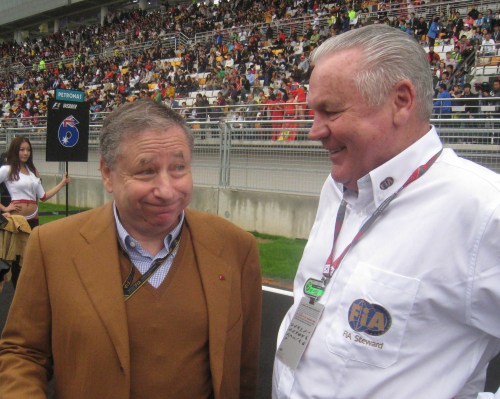 Behind you! Todt and FIA Steward Alan Jones on the Korean GP grid

McLaren boss and FOTA chairman Martin Whitmarsh has praised Jean Todt for the job he’s done in his first year as FIA President.

Whitmarsh was quizzed in the context of recent suggestions that Max Mosley and associates are not happy with the way things have gone under Todt.

“I don’t know if this is about the speculation that has been in the media about Jean Todt,” said Whitmarsh, “and that there are moves within the FIA and happiness and who might be behind that. I’m not involved in FIA politics.

“But I’ve got to say that Jean Todt has I think played a good role. I think he’s busily and quietly reforming the FIA in the background, which I know has probably caused some discomfort within that organisation. I think he hasn’t used F1 as a personal platform for his own promotion, and I think that’s very, very positive.

“I think what Jean is doing is good, and we continue to support him in that position.”